Posted on February 26, 2019 by thespooniemummy 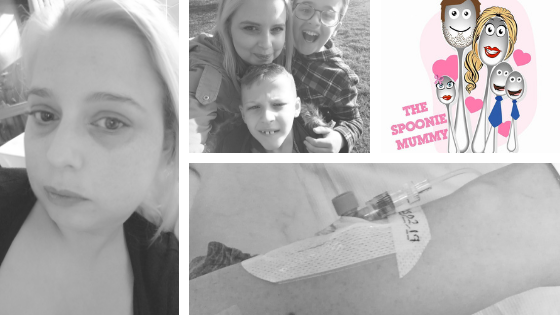 Well, what a start to the week. If you follow me on social media (Instagram, Twitter or Facebook) you will have probably seen that I have been struggling with my Crohn’s Disease and Rheumatoid Arthritis since the start of the new year.

Admitted With a Plan

This morning I had an emergency appointment with my gastroenterologist at Derby Royal Infirmary and she has admitted me to get me sorted out properly! It’s a hard thing to have to do to agree to come in for tests and treatment but I also know just how poorly I’ve been and that it really is the best option right now.

The blog has been fairly hit and miss all month due to me just not being well enough to post. This plays on my mind but I also know that it’s in my best interests to put myself and my children as first priority which is what I’ve been focusing on so I hope you will forgive me. As I’m now stuck in my hospital bed for the majority of the day I thought this would give me some time to once again, write for you all. I’m not sure how long I will be here, my doctor is really good and wants things done as quickly as possible so hopefully my body behaves accordingly now! I thought ‘The Hospital Diaries’ might be interesting for you to read – a chance to see into an admission if you haven’t had one, a patient’s experience first hand and also a description of some of the things that happen.

I am currently on MAU (Medical Assessment Unit) until a bed on gastro becomes available. I’m in a side room which is great as it’s nice and private and I have my own bathroom which can be really convenient when you have a stoma that’s not behaving too well. The nurses, doctor and other ward staff have been absolutely brilliant, they are all lovely and my care here has been brill so far.

The plan at the moment is:

So so far, I’ve started meds and fluids, had the x-ray and signed consent forms for the two camera tests. They have changed me to IV anti sickness and although I’m still getting nauseous I’ve not physically vomited now since that.

I had a really interesting chat with Ste yesterday that I wanted to share with you. I was absolutely gutted that I had to come back in. I cried in the car on the way home to collect my things, cried on him when I got home, cried when he left me at the hospital. I can’t believe I’m back here again.

Having grown up chronically ill I have never known anything different and although I’ve had admissions throughout my life they have generally been planned and short. Since my Crohn’s took a nose dive 3.5 years ago, hospital stays have become a more regular part of my life. I see it as an end point – I’ve tried and failed to cope and I have to concede defeat and come in here to be fixed, again.

Ste told me I had to look at it in a different way and his words really meant a lot and I thought they might help those of you who look at hospital stays like me – as a personal defeat. He has had numerous, lengthy stays in the hospital including an 18 month stint. He reminded me we are chronically ill. Hospital is part of our lives, we have to factor our health into our every plan. Being out is a blessing, we have to count those days as a victory for us against our chronic illnesses. Rather than feeling admission is a weakness, a failure, we should look at it as us doing the right thing for our body. It needs help and we can’t control that, but we know the point when enough is enough and we ask for help from our doctors and nurses graciously.

Rather than seeing this as an end point to my battle, I am looking on it now as the beginning to my next fight. One to battle through and win, so when I get out I can really start enjoying life again. I also want to thank you readers, for sticking by the blog and vlog, even when the content is a little bit hit and miss due to being poorly. This blog is my passion, I love it and it gives me something to work for everyday. Your following it is very much appreciated.

So I thought I’d post pictures so people can see the effect of the steroid ‘moon face’ that’s particularly rampant when using higher dose steroids like I’m on at the minute.

I have also started on fluids so that won’t be helping as my body is being literally pumped full of them! My mum and dad popped in tonight and they noticed a difference already! Ugh!

I can be terrible for cannulas and generally have to get a few done while I’m in for a number of days! Because my elbows don’t straighten due to my arthritis I asked for it in my forearm as I find it easier to manage. It went in fine with no problems.

Unfortunately, after taking my fluids off to have my X-Ray it must have decided to have a paddy. When they put it back on my arm was really painful so I called them and said it needed to come out. After being a bit of a bleeder (oops)y new went in the back of my arm this time and is working beautifully so far!

Today I only got tea here but I was pleasantly surprised. I hadn’t ordered it as I wasn’t here obviously and it probably wouldn’t have picked it but it was pretty lovely! I managed about half of it so was pretty proud of myself and although the skin on the chicken looked lovely I didn’t want to risk it! The chicken breast was moist though, the roasties were lovely and the gravy was decent!

So that’s pretty much day one in a nutshell! Feel free to ask any questions below, I will endeavour to answer as soon as I can. I’m not promising content every day but will do it as and when I can and keep you updated.

Proud Mama again - these two just don’t stop making me smile! 💙💙⚽️
New Blog Post - Travelling With Chronic Illnesses - The Sunflower Lanyard Scheme
What a message to leave for the world 💕
Chronic illness is exhausting.
A Sunday well spent and all that!
Why Fridays are so fabulous 💙💙