Posted on April 1, 2017 by thespooniemummy

About 700,000 in the UK alone are on the autism spectrum (including Asperger’s Syndrome). It affects how a person communicates with and relates to others and how they experience the world around them. It is a spectrum condition – that means all autistic people will share certain difficulties but it will affect them in different ways and in severity (www.autism.org.uk).

I don’t talk about it too much as we still don’t have an official diagnosis yet but my youngest, Riley, who is 5 is currently being assessed as he appears to be on the spectrum.

I noticed that.Riley was developing as I would have expected when he was 2 years old. As a qualified nursery nurse who had worked with children for the previous 8 years, I had plenty of experience to rely on. Adding to that was my mother’s instinct telling me something wasn’t quite right.

One of the issues was his speech, which was delayed. The health visitors referred Riley to get his hearing tested. This indicated a slight case of glue ear and very minor hearing loss. After this result the health visitors unfortunately we’re not very helpful and wanted to put everything down to this result but I still believed there was something more going on.

We muddled on and Riley attended a playgroup for a year before starting school nursery in September 2015, just before he turned 4. It was during his first parents evening, a couple of months after he started, that things started falling into place. His teacher asked how I thought things were going and I reeled off everything that had been happening.

By then his glue ear had cleared up and since starting nursery his speech appeared to be coming on but his understanding was still severely compromised. He had issues with routine, obsessions and repetitive behaviour. Although loud himself, he doesn’t cope well with loud noises around him. There were other sensory issues too including issues with touch and a heightened sense of smell. He would flap his hands, especially when excited or waiting for something. He has very little awareness of danger. He was happy to play alone and whereas Leo would often ask me to play with him, Riley never did and when I tried he didn’t welcome my input.

Luckily she had noticed alot of this too and I finally felt like I wasn’t going mad and that we might get some answers and the help we needed. His teacher was fantastic. We implemented things at home and nursery to try and help Riley. He was referred to a pediatrician and a speech and language therapist.

After moving to Derby from Essex in November last year, Riley started a new reception class in January. His teacher and the staff here have also been brilliant. They have picked up on similar issues aswell so we are now in the process of being referred to a pediatrician here. The school have their own speech and language therapist who will be working with Riley as needed.

Riley is a happy, very bright, loving little boy. He likes playing in the garden, Paw Patrol, Batman and school work (reading, writing and maths). His current obsession is the calender and he has already told me off this morning for still having March up when it’s April now! One of his ‘jobs’ at school is to write the date on the board for his teacher every morning. He sometimes appears to live in his own world – free from worrying about what other people think he will sometimes say things that are inappropriate. These aren’t meant to be hurtful or rude – he will just say things very honestly and how he sees them.

Having a child who is on the spectrum can be difficult. Between people not understanding, having to fight for an official diagnosis and just the day to day issues that arise from his difficulties, it requires a great deal of patience. This can be especially hard if I am flaring or in pain as patience can be hard to muster! But Riley is a wonderful little boy, ‘just Riley’ and I love him to bits and wouldn’t change him for the world.

Autism is an example of another ‘invisible illness’. To see Riley in the street you would think he looked like any other child. Then he may have a meltdown (not quite as severe or common now as we learn his triggers) or say something inappropriate. People don’t realise this is part of his condition as they can’t see it. Awareness again is key, so people don’t think you are a terrible parent raising a spoilt brat. They understand the possibility of an underlying issue and can think before shooting a judgemental look or muttering under their breath.

Tomorrow for National Autism Awareness Day we all plan to wear blue. Please join us and post your photos to show your support and let’s get people talking about and understanding this condition more! 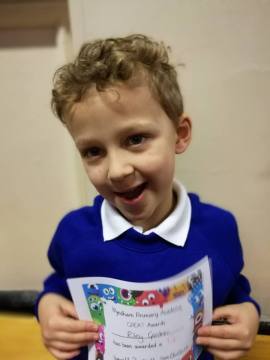 ← Appointments Galore!
To Reverse Or Not To Reverse, That Is The Question →

Happy birthday to my amazing, beautiful Mum @riley.lorraine Most people think that their Mum is the best but I know I'm right. This woman raised me (for a while on her own), cared for me, took me to all my appointments, advocated for me and made my do my exercises - and while at times I may have told her I hated her for it, I am so glad she kept pushing me to keep going with it all. I wouldn't be half the person I am without her. She deserves the best day and unfortunately it was just a door step visit for us today but soon we will celebrate. It sounds silly but I need to hug her, it makes me emotional every time I even think about it. I need a cuddle with my mum, she really is my rock. I love you Mum, thank you for being you and for helping make me who I am. Enjoy the rest of your day in the sunshine xxx
Could talk to them for hours, they make me smile so much! I don't know when yet but I hope they are prepared for the enormous and extremely long cuddles they are going to get when I see them!
What's your score today?
Five Friday Favourites This week 911 (American TV show) had to be on the list, I have been totally sucked in and love it! Me and @ste_w22 were up until half two on Tuesday night (Wed AM) finishing off season 1. Highly recommend a binge if you are looking for something new to watch. Next up is another TV show, The Crown on @netflixuk - I finished the last couple of episodes of season 3 this week and cannot wait for the next one. The casting has been great throughout and they are doing an amazing job with it all. Along with Victoria and Elizabeth the 1st I think our queen is up there in the greatest monarchs list (and one of my favesl and have really enjoyed watching this series. Next up is my personalised mask cover that Ste made. It has a proper medical grade mask inside that is replaceable, so keeps me extra safe but looks pretty at the same time! Ste is a great gift giver and did it again with this book. He knows what kinds of books I like and picked up this one as it was in a similar vein to one I have just read and it has had fantastic reviews. Am enjoying so far so will be sure to update you when I have read it all! Lastly, I was amazed at the response to #worldIBDday this year. I was so happy to be included in some great campaigns and the response from people I know outside of the community was lovely with people sharing posts and messaging some kind and supportive replies. Thanks to all involved! That's my five, what are yours this week?
Thank you to everyone who entered the giveaway I ran with @jennafarmeruk for her 3 e-book bundle... the winner is @colitis_mummy Check out my blog post reviewing Jenna's most recent book to see how you can order your copies - they are currently on offer so if you are quick you can get some money off! Link in bio
#tbt #throwbackthursday #throwback Kinda sums up my two perfectly! Riley jumping straight in while Leo carefully observes the situation before committing. This was 5 years ago, Riley was 3.5 and Leo 6.5. If you scroll you can see how the situation escalated thanks to my grandparents cheering Riley on! My Gramdma thought it was brilliant, she loved how much he enjoyed himself and like she said, clothes and children can be washed! She would be so proud of Leo, following in her footsteps and going to Grammar school. And of Riley still having that zest for life like she did. I miss her every day so much!