Good evening, this is a bit of a late one but have finally had the last day of school today and we are officially on Summer break! Yay!

Some of you may know my boyfriend Ste, know that he also has Crohns Disease and know that he has jejunostomy feeding tube (PEG-J), for some this will be new information! He had surgery in January to create an opening and a tube was pushed through his abdomen into his jejunum (the middle part of the small intestine). A section of tube remains on the outside of his body which he tapes up to prevent it dangling when not in use.

He uses this tube daily, both for medication and for enteral nutrition. The decision was made to place the PEG-J due to his malabsorption issues and the fact he can’t tolerate food and vomits almost everything he eats due to gastroporisis. He is actually sick without even eating too. He was on at home TPN on and off for 3 years but this led to eight bouts of sepsis in twelve months. He was then taken off this for his own safety.

Ste takes some of his medication orally in soluble form as they are absorbed better by his body this way. Any other tablets he has to dissolve in St Marks solution and inject into his tube to ensure he is absorbing as much of them as possible. It also cuts the risk of him vomiting them back up.

He is also fed through the tube. This means he gets the calories and nutrients etc he needs without having to physically eat. He sometimes fancies something and will eat a little, but this generally ends up with him repeatedly vomiting. This obviously isn’t pleasant at all as this already happens multiple times a day anyway due to his gastroporisis.

The feed is delivered monthly much like our stoma supplies. He sees his tube nurse regularly who keeps an eye on the tube aswell as making sure he is getting what he needs as she is able to amend the feed he has if need be. During his last appointment she has recommended changing his feed so he is taking more calories on but he won’t start this until he receives his next delivery.

Ste taught me to be able to set up his feed and now I often get it ready for him while he is in the shower or changing his stoma bag before bed. I thought I would take a few photos and try and briefly explain this so people have a little better of understanding of what comes with having a feeding tube. 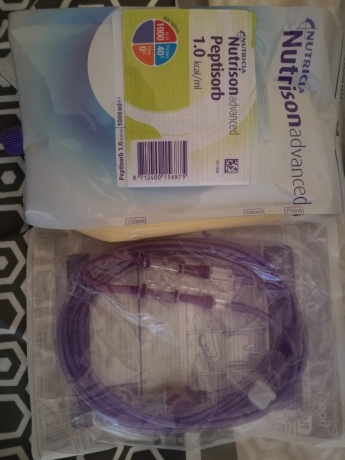 For these purposes I’m setting him up a one litre feed (easier to describe and photograph), although he normally has one and a half litres which we have to make up into a larger bag along with 17.5g protein powder. First I get together the things I need which includes his pump and stand (this is left to charge during the day while not in use), the bag of feed and the giving set. 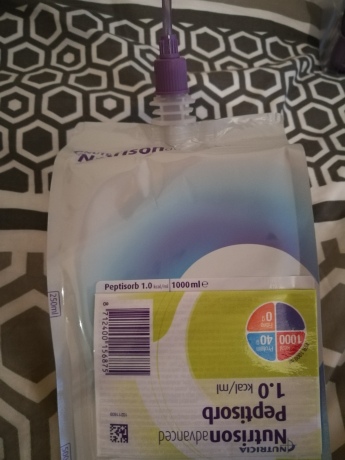 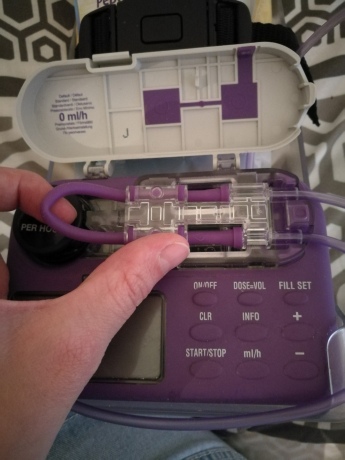 The next part of the tube runs through the pump and then back out again.

I have now got the rest of the tube gathered up ready and I turn the pump on. Now I need to fill the tube up so it is ready for Ste to attach to his PEG-J tube so I press the fill set button. 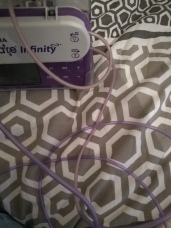 It’s now ready for Ste to screw into his JEJ tube and he will start the feed off. A one litre bag will take approximately 12.5 hours to run through for Ste as he has it on around 80ml/hr. Some people can tolerate it at speeds of up to 125ml/hr so their’s will only take around 10 hours. Ste has it running overnight to try and minimise the interruption to his daily life. If he gets up in the night he has to carry the stand with him to the bathroom as he is constantly attached to it while it is running.

The tube can be left in indefinitely. The tube part may need to be replaced at some point but as the major surgery work has been done this wouldn’t be a huge undertaking. The site of the opening needs to be kept clean and he has to advance and rotate the tube weekly. This means he has to push the tube about an inch further into his jejunum and rotate it around 360 degrees. This minimises the risk of scar tissue building up and ‘burying’ the tube which could cause issues and lead to further surgery.

I hope this has been an interesting insight into life as a tubie, particularly a PEG-J which isn’t used nearly as much as other types of feeding tubes such as NG’s (nasogastric) or PEG’s (percutaneous endoscopic gastrostomy).

Please feel free to ask any questions or share your experiences of feeding tubes below. Ste is also happy for me to pass on questions to him and will reply in the comments.

2 Comments on “Getting Ste’s ‘Tea’ Ready”

Got my first present from a child at school today - what a little cutie! Made me day 🤍
Happy new month everyone!
He appreciates the little things!
There’s a new post on the blog and it’s for all the fellow mum of teen’s out there!
Recommendation!
Finally feeling better! I went back to work yesterday after being sent home within 10 minutes of arriving on Thursday! Not had a migraine like that one for a long while but am glad I seem to be coming out the other side now.