Posted on December 7, 2018 by thespooniemummy 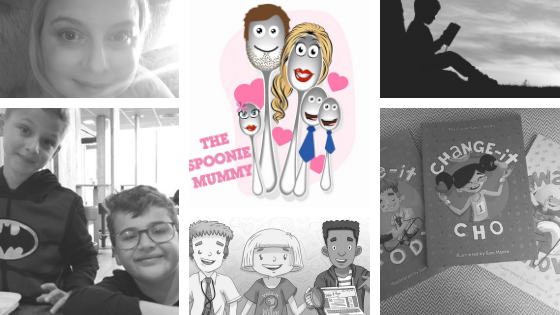 Good morning and happy end of the week!  Today I want to share some great new books we were kindly sent by Clever Tykes.

The books have been designed to encourage positive behavioural changes.  They help inspire positivity, innovation, independence, resilience and resourcefulness and are aimed at children aged 6 to 9.

What Did We Think?

The books are really well made and the illustrations are fab.  Both of my boys (aged 7 and 10) were able to read them themselves but also enjoyed it when I read them as their bedtime story.  We split the book over two nights, it would have probably been better over three or four nights but they were desperate to know what happened so we kept reading for longer than usual!

We read three of the books and enjoyed every one.  My personal favourite was the one about healthy eating (I am a bit of a stickler for it) but the boys picked Code It Cody as theirs.  They both love computers and Leo has recently started learning about coding.  I loved the fact that Clever Tykes use characters from the diverse world we live in – Cody has a hearing aid.  Living with a disabled mum, the boys never see this as a big deal but for some children who haven’t come across disability, this will be a great introduction to it.

I think these books have given the boys a real boost with their confidence.  Riley doesn’t struggle as much but Leo can become quite easily defeated by things and tends to give up when challenged.  The way the characters in the books tackle the problems they face is fantastic and helps children to understand they can find different ways of doing things and to keep trying.

I do cross stitch and Leo asked recently if I could teach him.  It was lovely sat sewing together and just chatting as we did so, but he became frustrated when the pattern he was doing didn’t come out right.  He handed over his sewing stuff and got up to leave the room and I thought he was giving up.  Then he told me he was just going to the toilet and when he got back he was going to just attempt his own pattern to practice instead of following one from the book.  I was really proud of him!

Both boys were full of their own ideas when reading the books too – giving me things that they thought they could do, ideas on computer games they would like to invent and Riley enjoyed telling me about his current topic at school which was healthy eating when we read Change It Cho.

These books will make a great addition to any child’s bookshelf, and would be an ideal Christmas gift.  The stories are well written and engaging for kids and the message behind them is a really good one – and different from so mnay others out there.  I would highly recommend for all children in the 6-9 age group and so would the boys!

The books are available to buy from the Clever Tykes website.  You are also able to purchase colouring and activity packs to go alongside each book which is a great idea to keep the lesson going, as well as certificates for when your child has completed them.  Teachers are also able to purchase teacher guides for use in the classroom.  In the back of each book there is an email address to which children can email the characters in the book to tell them what they thought of the story which is a really nice touch!

Hope everyone has a great weekend.  Please let me know if you decide to purchase these and what you think of them, it would be good to hear of other children enjoining and benefiting from them.

I received these books from Clever Tykes as a gift.  All opinions in this review are my own

I think this dye is not the one. I still love the colour but not at all what I was aiming for!
#tbt #throwbackthursday
The boys loved their football camps yesterday, 6 hours of football definitely tired them out - even Leo admitted to being a bit tired which NEVER happens! He did have an extra hour long goal keeper session last night too though bless him.
Today's blog post is my monthly book review post - check our what I've been reading and what I thought of them via the link in my bio!
Such a well written piece!
Embracing the cream make up today and a no filter photo!