Posted on October 8, 2018 by thespooniemummy 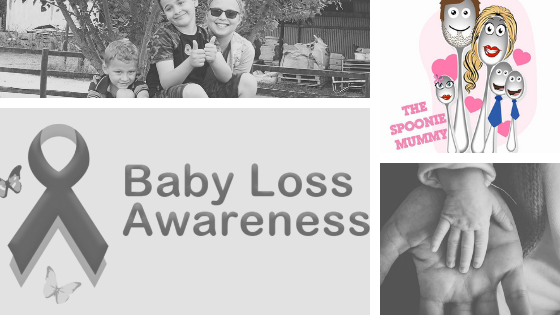 Baby Loss Awareness Week starts tomorrow, so I thought today I would share my story with you.

What Is Baby Loss Awareness Week?

Baby Loss Awareness Week is held every year between October 9th and 15th.  It is a collaboration between a number of different UK charities and is designed to raise a awareness of the issues affecting people who have experienced pregnancy and baby loss.Baby Loss Awareness Week calls for improvements in research, care and policy in regard to bereavement support, as well as raising the awareness of it to people needing it.

My pregnancy with Leo was pretty straight forward.  I experienced some blood loss around the 11/12 week period and a scan identified a collection outside the amniotic sac, which was no danger to him thank goodness.

Deciding to go for baby number two was easy, I couldn’t wait to give Leo a brother or sister and absolutely loved being a mum.  I was lucky to fall pregnant quickly again once we could start trying.  Because of the medications I am on for my chronic illnesses I have to carefully plan this and come off some of them in order to try and get pregnant.

When I started bleeding again a few days before my twelve week scan, I panicked but felt that the problem may be the same as I had experienced with Leo.  I had suffered morning sickness with Leo but this pregnancy had been pretty rough, and I had struggled with the sickness terribly.

My World Starts To Crumble

I was called into the Early Pregnancy Unit at Southend Hospital and given a scan.  I couldn’t bring myself to look at the screen until they told me what was happening.  My world was shattered when they confirmed the baby had passed away at around nine weeks and five days gestation.

They cleaned me up and ushered me into a room with a midwife.  She was absolutely lovely and I felt very lucky to have her support and help.  She explained the scan had shown some issues with the baby’s brain which wasn’t growing correctly.  I know many people do not get a reason for their miscarriage and in some way, felt this helped.  At the time though I remember thinking that whatever the baby had wrong I would have looked after and cared for it.  The midwife handed me an envelope.  Inside , she explained, was a scan photo of my baby.  She explained that she understood I may not want to look at it right then and possibly never would, but she felt that I may want to in the future and suggested I take it with me, which I did.

I was then taken to see the doctor.  Unfortunately my body was hanging on to this baby, even though it had died, and that was in part why I had been so very unwell.  I was told that I could wait and see if a miscarriage would start naturally, but they were pretty against this as the baby had no heartbeat and would continue to make me more and more poorly in the meantime.  The next option was medication.  I would be given a pill to start the miscarriage, and then have to go back for a second one, followed by a scan a little while later to ensure everything had come away.  The next option was surgery, and this was what they felt was best at my stage of pregnancy and for my situation.  They explained that the baby would be surgically removed in an operation called a Dilation and curettage (D and C) and it would be a day case procedure.  I felt like my heart was breaking.  Of course my body wasn’t letting the baby go, I wasn’t ready to let go either.

I decided to follow the doctor’s advice and opted for surgery.  I was told to come back the next day.  The rest of that day was pretty much a blur.  I went back to hospital the next day and the procedure went pretty smoothly.  I remember waking up in recovery and starting to cry.  The nurse came over, asking if I was ok.  I told her no, she panicked that something was wring physically, but I just remember feeling so empty.

I was in hospital till the evening as my blood loss was a little more than they would have liked and my blood pressure took a nose dive.  Luckily, they felt I could go home and keep an eye on things myself once it all levelled out.

There were lots of tears and sadness, but I was lucky to have Leo already who helped get me through those dark days.  Deciding to try again is terrifying, but eventually I was ready, and once again, fell pregnant quite quickly.  My pregnancy with Riley wasn’t so easy – I ended up being scanned at 6 and 8 weeks due to more bleeding but luckily my little man hung on in there.  My twelve week scan was an ordeal, I was being sick all morning, partly through morning sickness and partly through nerves, but it went well.

Unfortunately, trying for baby number three turned into another year of heartbreak.  I suffered two miscarriages in 2013, both quite early (at 5 weeks and 6 weeks) which happened naturally.  The first one was horrific due to the fact that we were on holiday, so I had to attend A and E at a strange hospital and did not receive an awful lot of support.  They confirmed what was happening and I was sent away.  Things were not passed on to my hospital properly and even though I let them know, I still got a letter a few weeks later inviting me for my twelve week scan.

When the second one started, I knew what was happening and I called the hospital to let them know.  They were concerned about the blood loss as it was pretty bad, but I could not bring myself to go in and have another person confirm another one of my babies had died.

I had very strong feelings about the sex of the babies I was carrying.  I guessed the boys would both be boys and I felt the first two babies I had lost were girls.  I think I had convinced myself I just couldn’t carry girls.  This last miscarriage though, I felt strongly that it was a boy and because of this, all would be ok.  When it wasn’t, it broke my heart that little bit more.  I had a very vivid dream the next night, that I gave birth to a boy and remember waking up, feeling the weight of the baby that had been placed in my arms in my dream.  I know some may not believe in spirits and things, but I truly believe he was coming to me to say goodbye.

I feel that one of the hardest things to get my head around was the fact that it was like my babies never existed, except for me and their Dad.  We had only told our parents and siblings, as I prefer to keep it quiet until everything is confirmed at the twelve week scan.  I also don’t go shopping until after this date.  After my first miscarriage, I I did decide that I would go and buy a teddy when I found out I was pregnant again.  I still have Riley’s and the following ones from the two babies I miscarried.  Having something physical of theirs in the world helps me remember they were real, and here, even if only for a short time.

There Is Support Out There

I was lucky to have support from my ex husband, who, at the time, was very good.  Many people do not get this, and as there still seems to be this huge taboo in speaking out, have to deal with all these feelings themselves, quietly.

Miscarriages happen to one in four women.  It is so very common, yet so rarely talked about that people think they should just get on with it and cope by themselves.  This is not the case.  There are some great charities to help support parents out there who have lost a baby.  My inbox is also always open should anyone need to talk, and I am, more than happy to do that about this subject as I know not all the people get the support I did.

The #waveoflight will also be happening again on the 15th October at 7pm.  Light a candle and leave it burning for at least an hour as we remember all the babies gone too soon.  Take a photo of your candle and share it on your social media with the hashtags too and show your support.

Thankyou for taking time to read this one.  I am never sure if these personal posts ever some across as well as I want them to!  As I said previously, my inbox is always open so please feel free to message me if you need a chat.

Such a fun night with the ladies last night... my last girls night for a while!
Ostomy 101 - 5 Signs of Dehydration You Shpuld Know
Ad | Gifted
Happy birthday Mum!
#ostomyhydration top tip!
Well hello... it has been a while since I popped up on my grid! It has literally been the craziest couple of weeks with my final uni project deadline, kids holidays, appointments etc... all while dealing with really bad fatigue!