Posted on May 3, 2017 by thespooniemummy 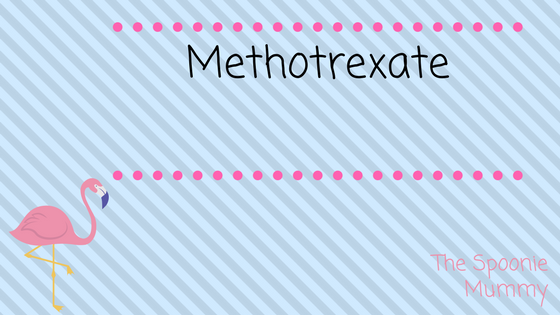 Low dose Methotrexate (25mg or less once a week) is used to treat a range of joint, skin and bowel conditions.  This includes rheumatoid diseases, Crohn’s disease and severe psoriasis.  In higher doses it is used to treat cancer.

I was put on Methotrexate when I was 14 years of age.  I remember it being the first time I was more heavily involved with what drug I was being put on.  My rheumatologist gave me a leaflet which told me all about it and I took it back atr my next appointment and told him I couldn’t possibly go on it.  One of the possible side effects was your hair falling out and as a 14 year old girl this was not an option!  He explained that the side effects listed can be extremely rare, but if just one person experiences them on a particular drug, they have to list it.  What I hadn’t been told at the time was that Methotrexate was also used in much higher doses to treat cancer, which was when this side effect was more prevalent.

I began the medication after a chat with my mum and doctor’s.  I started on the tablet form of the drug, once a week.  To help with side effects I was also put on folic acid which I used to take the 2 days prior to my methotrexate dose.  I started off on 7.5mg and then slowly moved up to 15mg.  Methotrexate can affect liver function so this was checked more regularly as the dose went up, before I moved to monthly blood tests to monitor it.  Over the years I was put up to 20mg, and then a few weeks ago I was changed to 22.5mg after my most recent stay in hospital.  I was also moved onto injections a few years ago as the sickness I was experiencing got worse. I would regularly be sick after taking my tablets which meant I wasn’t absorbing the drug properly.

As already mentioned, the side effects can be quite extreme. Since moving to the injections I am rarely physically sick now but am still troubled by nausea and the severe headaches the day or sometimes two after my injection.  I also get bouts of mouth ulcers although this is also a Crohn’s symptom so could be triggered by either.  I have moved onto taking folic acid every day except injection day to help calm them down.  I also take my injection before I go to bed and the idea is I sleep off the most severe side effects that way.  I also try and get an early night so I get a longer sleep on injection day.  I use pain relief regularly anyway at the moment as I am flaring which helps with the awful headache.   I also take my anti sickness when I do my injection and through the following day every 4-6 hours.  This helps ease the nausea to a somewhat more tolerable level.  I also feel more fatigued the day after my injection so try and take it a bit easier.  It is often described as the ‘Methotrexate hangover’ and it really does feel like one! The side effects are definitely harder at first but they do ease and with the right management techniques can be tolerated as it is a drug that works well for most.

Pregnancy while on Methotrexate is a big no no.  The drug can alter a man’s sperm and a woman’s eggs which can cause severe birth defects in babies or a miscarriage.  I had to get advice from my doctor’s regarding getting pregnant.  I was told to come off Methotrexate for at least three months before we started trying for a baby.  For the rest of the time a good contraceptive is very important.  I found this information out about a year after I started taking Methotrexate.  My mum had to make a panic call to my doctors and get me an appointment as I refused to take the drug again.  When I got to hospital I told them although I had no intention of having a baby any time soon I did not appreciate not being given this information.  They admitted they hadn’t as they didn’t believe it relevant.  I had known these doctors all my life and they knew I liked to be involved with all aspects of my care and treatment.  In fact it was because of theirs and my mums way of ‘handling’ me that has made me a confident self-advocate and want to help others.  I went back to taking it the following week once they had apologised!

So on to my injecting routine.  The Methotrexate comes in a pre-filled pen syringe.  I take mine on a Monday night before I go to bed.  I take the pen out of the box and check there is no damage to the syringe and the medication is in date.  I then remove the cap, press onto my leg and press the button which fires the needle.  You can inject into your thigh or stomach but I prefer doing the pen syringes into my thigh.  My other injections are the type you push in yourself and I prefer doing those in my stomach.  I have to alternate the leg I inject into every week, although can only do one side of my stomach now due to my ileostomy.  The medicine is injected and then I count to 10 before disposing of the pen.  Sometimes the injection site bleeds.  I also often bruise myself too.

I decided to write this post as it is probably one of the things I get asked about most!  I have been on it a very long time and know quite a few little tricks to help deal with the side effects.  As I said, the first few weeks can be rough and hopefully some people feel supported through it after we talk.  As always my inbox is open – I am happy to answer questions, support and advise on the things I have learnt following my experiences.

💙💙 Been a little quiet.... my two babies arrived yesterday and I couldn't be happier - those cuddles were exactly the medicine this mama needed!
Well, I received an unexpected early email from uni this evening... it was due to come tomorrow but my grade had been posted!
Had the best evening yesterday thanks to my @emchap85
• 4 WEEKS SINCE SURGERY •
Today was a good day!
You know what...the team did good 🏴󠁧󠁢󠁥󠁮󠁧󠁿