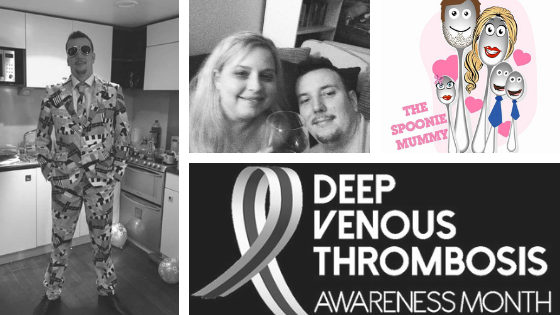 What is Deep Vein Thrombosis (DVT)?

What is pulmonary embolism?

This is a complication of DVT, where a piece of the blood clot in the leg breaks off into the blood stream and blocks one f the blood vessels in the lung.

What are the symptoms of a DVT?

What are the symptoms of pulmonary embolism?

Both DVT and pulmonary embolism require urgent investigation and treatment.
Seek immediate medical attention if you have pain, swelling and tenderness in your leg, and you develop breathlessness and chest pain.

Other risk factors include

So I wanted to highlight this important information because so many don’t know about it till it is too late. After spending time in hospital again, I have been subjected to the daily injections in my tummy and am covered in little bruises which makes it look like I have some kind of weird skin disease, however the importance of these lies close to my heart.

During his most recent hospital stay, Ste was diagnosed with blood clots and is now on a six month course of blood thinners to hopefully dissolve them. This will need checking again later this year, and his treatment time will be extended if need be.

One of my best friend’s, Daniel, has also been diagnosed with blood clots which they have linked to his Crohn’s Disease. In 2016 Daniel supported me through a hard time personally and with my bowel surgery and ileostomy formation. He was then taken into hospital, where the DVT affected the blood flow to his lower left leg, leading to him needing it amputating. I thought I would interview Daniel for this post, so he could explain more about what happened, and why it is so important that people are aware of the risk factors and symptoms of DVT.

An Interview With… Daniel Lee

Hi Daniel, can you give us brief intro about yourself?

I’m Dan and I am 33 from London. I am a Chelsea fan and enjoy going to watch them play regularly. I have also been studying accountancy at college.

What are your diagnosed medical conditions?

What were the first symptoms you experienced in respect of the blood clots?

One day I was walking down the road and it felt like I had pulled a muscle.I was limping for a few days but didn’t think much of it. Then it got really painful.I was back and forth to outpatient appointments trying to get a diagnosis. They ruled out blood clots straight away.

What tests did you have?

I was diagnosed with arterial thrombosis. The arteries in my leg were completely blocked. I had 5 operations in the following two weeks, including an artery bypass which worked well for about 6 weeks. One night I woke up in agony, and my foot was freezing cold. I rang an ambulance and after a couple of days of tests was told the only option left was to amputate.

Losing your leg was extremely difficult. Did you get a lot of emotional support at the time?

I’ve been very lucky with the amazing support I have had from family and friends. Some of the amputees I have met in physio have o one. If I was one of them, I wouldn’t know what to do.

Have they linked your blood clots to the Crohn’s Disease?

Crohn’s Disease was a contributing factor to the blood clots, as well as the blood disorder I have.

How do you manage the Arterial Thrombosis now on a daily basis?

I am on blood thinners (warfarin) for life and have regular blood tests to check my clotting factor.

How are you finding life with a prosthetic limb? Looking forward, what are you hoping to achieve now you are healing?

I am back in the gym regularly now and my main ambition is to run the London Marathon, although it may not happen for another couple of years!

A huge thank you to Daniel for answering my questions, I hope you found his story interesting. I won’t be letting him get away with not doing the marathon now either but will make sure I am at the finish line with a pint! I hope this post has been interesting and insightful for everyone. Let me know in the comments below if you knew about blood clots or DVT , or have learnt about it through this post. As always, thank you for reading,