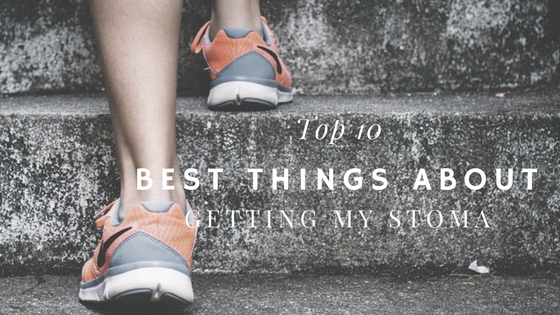 Good morning and happy Friday!  If you follow me on Facebook you will have seen my apology about not getting a post up on Wednesday.  I have been working hard on my university assignment this week.  I am pleased to say it is complete and has been submitted.  Now I just get to worry about the score!

I know when I was diagnosed with IBD I felt like my world was ending and that I would end up with a bag and that was it.  I did end up with a bag, but thanks to the support of the fantastic IBD and ostomy communities I was much more accepting of it by the time of my surgery.  And in fact it was one of the best things that could have happened.  Today I wanted to share a list of ten things that have changed for the better for me since ostomy surgery. 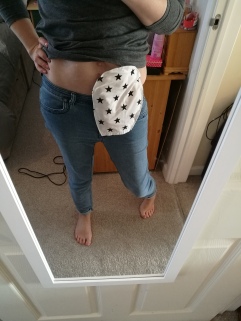 THE PEOPLE I HAVE MET

This has got to be one of the best things that has come out of my surgery.  I had already been an active member of the IBD community when I had my surgery but my ostomy has bought so many more wonderful people into my life including Ste, the Purple Wings charity, Jasmine Stacey and my co-hosts on The IBD & Ostomy Support Show.

NO MORE LONG VISITS TO THE BATHROOM

I used to spend so much time in the bathroom and would even get bruised, marked legs from the amount of time I was sat there.  As a mum you can imagine this really wasn’t convenient and trying to get out of the house was a nightmare – I would always be needing a toilet trip five minutes before I left the house.  It would limit the amount of time I wanted to spend at places and often left me deciding staying in was the better option.  I still have to visit the toilet pretty regularly to empty my stoma bag but it takes less than five minutes and no sitting down!

GIVING ME THE PUSH TO START BLOGGING

I actually started my first blog while I was in the hospital but once I got home my focus was on recovery and the boys so I didn’t continue it.  I have wanted to do something like this for so long but never took the plunge.  Once I was feeling better though and I felt I really could help people with what I have been through and am still experiencing, I signed up and the rest, as they say, is history!

Since my ostomy surgery my health has been so much better.  If you still have your large intestine, this kind of surgery gives that area a break and often puts it into remission.  I had a flare at the beginning of last year but it was so much easier to manage with the bag and luckily the doctor’s got on top of it quickly.  I had just moved to Derby so was off a lot of my medications until I could get to see my new consultants which contributed to this flare.  Since then, aside from the odd blockage my Crohns has been very well controlled.

To some this would sound strange but I had dropped to just over seven stone during my flare and was suffering with deficiencies in things like potassium and protein.  Once I had my ostomy formed I was able to eat more normally again and started absorbing the things I needed from food.

NOT HAVING TO WORRY WHEN GOING OUT

As I mentioned in my first point, going out often felt impossible due to the constant toilet trips.  I would end up running late for things due to being stuck on the toilet and often stopped making plans to do things as I just couldn’t manage them.  I have never been a fan of using public bathrooms but the sheer amount of times I would need to go, the speed at which the feeling came on and the possibility of an accident was just too much to cope with.  After stoma surgery there are still concerns – what if I need to empty my bag, will there be a toilet, the possibility of a leak etc.  This ease the longer you have your ostomy.  I find most people are concerned about the smell but there are things that can help.  You can see the post I wrote about ostomy smell here

The flare I was in prior to my surgery was pretty horrific.  I lost a lot of weight, felt constantly sick and weak, the pain was immense and I was feeling lower and lower.  Getting through that, surgery and my recovery gave me such a boost and if I can cope with all that, I am pretty sure I can do anything I want to set my mind to.

BECOMING A CO-HOST ON THE IBD & OSTOMY SUPPORT SHOW

Getting to become a co-host on The IBD & Ostomy Support Show was an amazing opportunity for which I was truly grateful.  Not only do I get to help others with advice and support, I have made the best friends in my co-hosts who are all brilliant and inspiring people.  The show is live every Thursday at 8pm GMT on our YouTube channel and you can also see all the past shows on there too.

GETTING SOME CONTROL OF MY LIFE BACK

Not being restricted to the toilet for lengthy periods has definitely helped me feel more in control of my life.  I am now more confident and enjoy seeking out new opportunities and experiences.  I am able to be the best parent I want to be now and can do so much more with the boys and my step-daughter.  I am once again enjoying food and cooking, which has always been a passion of mine but I struggled with when flaring.

My confidence has soared since having my surgery.  I had also got out of a bad relationship a couple of months before being admitted but I literally felt like a new person.  Every one commented on how well I was looking.  I have been able to wear things I still enjoy and often share my outfits on my Instagram page to show that you can still wear your favourite outfits with an ostomy.  Check it out here.  My mental health also received a boost.  Being so very poorly for six months had really taken it’s toll.  Not being able to enjoy going out and doing things I really enjoyed was soul destroying.  I am now living and enjoying a much healthier and happier life and am so very grateful for what having my ostomy has contributed to this. 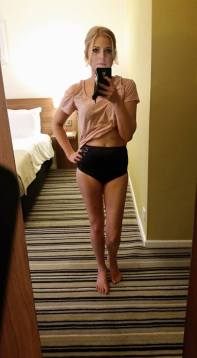 I hope this list will show you the positive sides of having an ostomy, especially if this is something you are facing soon.  I received some great support from the ostomy community online and that really helped me to accept my stoma and become more confident with it.  Could you add anything to my list?  let me know in the commetns below!

Today is #worldautismawarenessday Three years ago I wrote a post about my youngest son Riley. So much has happened since then, and unfortunately we are no closer to a diagnosis due to his Dad refusing to let him see a doctor about it. This means his SATS results were affected as his teacher said that had it been a 'good day' Riley would have done significantly better. Now in year three he gets sent out of class when he needs to calm down but with nothing to refocus his brain, I question how this will help. He still flaps and has obsessions, Space is his main one at the moment. He is noisy but cannot cope with high background noise levels. He says exactly what he thinks, when he thinks it which can be inappropriate at times but he means no malice. He is so empathetic and hates the thought of people struggling and suffering. I will pop a link to my original post in my bio but my message would be to other parents - follow your instincts and don't give up. I don't want a label to define my child, I want it so other people understand him a little better. To me he is my kind, beautiful, funny, intelligent, sensitive boy and that will never change
This morning I have a guest post up all about meal prep and how to make things easier on yourself! Although it focuses on busy parents I thing the tips will be super useful for Spoonies too. I will pop a link in my bio! Enjoy ❤💕❤
Well hello there April... what a strange old month you are going to be!
Ad | Gifted tickets Finally had the chance to show the blog some attention today. Have a few posts in the works so will be sure to keep you updated with what's going up on here too. We were kindly invited by @showcasecinemasuk to the premiere of Zog & The Highway Rat- here is how we got on! Link in my bio!
And for the prosecution I give you... my brother! He is struggling and hating not working bless him. But I have definitely seen an overall 'lightbulb' moment for many folk this last week!
Shared this great diagram from @jo__love__ I'm sure many of you will look at this and recognise the stages. I've already done a few loops of this circle myself! Fear is something I've been studying lately and as someone who suffers with anxiety, it has been really interesting to look at the biological evolution of fear. We have gone through so much in an evolutionary sense but fear, for the most part, boils down to the same as what it was back in the days of the caveman. We still have that basic survival instinct and while we may not be hunted by animal predators anymore, human kind is now being attacked by the Corona virus. While we understand more about this and our scientists are working hard to find a vaccine or a cure, our bodies essentially go into survival mode and we feel this as fear and anxiety. I wanted to share this so you know you are not alone in these feelings and that so many of us are feeling the same way. I want you to know that with very crash, there will be a rise. That we will get through this and there are brighter times ahead. Keep your chin up fellow humans and I'm always just a message away 💕❤💕

Guest Posts I Have Written or Featured In

Better You Iron Spray Review for A Balanced Belly